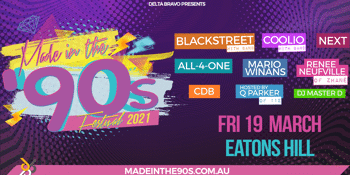 Blackstreet, Next, All-4-Ones, Mario Winans, Renee Neufville & CDB
Eatons Hill Hotel - Grand Ballroom (Eatons Hill, QLD)
Friday, 19 March 2021 7:00 PM
216 days away
18 Plus
Music
Send this event to
If there was ever a need for the good vibes of feel good old school r&b, it is now.

The Made in the ‘90s Festival promises just that, with one of the hottest old school r&b lines ups curated in Australia and New Zealand in recent times.

Heading the line up are Grammy Winners, Blackstreet (“No Diggity”, “You Blow My Mind”) in their first ever Australian & New Zealand shows featuring their incredible band, Grammy winner and all round legend, Coolio, (“Gangsters Paradise”, “Fantastic Voyage”), hitmakers Next (“Too Close”, “Wifey”) in their first full shows here since 2005, Grammy Winners All-4-One (“I Swear”, “I Can Love You Like That”) in their first Aussie shows in over a decade and for their first ever Kiwi shows, r&b singer and producer, Mario Winans (“I Don’t Wanna Know”, “I Need A Girl”) in his first ever shows in Australia and New Zealand and Renee Neufville, one half of the dynamic Zhané (“Hey Mr. DJ”, “Groove Thang”).

On the local tip, the line up is rounded out by local r&b legends, CDB (“Lets Groove”, “Hook Me Up”).  Hosting this spectacular party and trip down memory lane is none other than one of the voices of ‘90s R&B group 112, Q Parker who will be joined by old school R&B DJ’s in each city guaranteed to keep your heart racing and your feet moving in between sets.

The Made in the ‘90s Festival is a must for any lover of the old school.